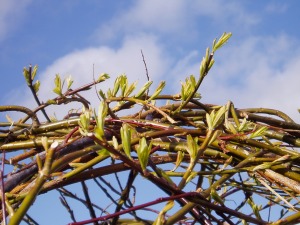 Time is something most of us don’t have enough of.  I could do with several more hours each day to fit everything in, but when I actually stop and think about it, I’d probably just whizz around like a blue bottomed fly in those as well so maybe it’s a good job I don’t.

It was a timely reminder of the importance of slowing down once in a while when I found myself contemplating a snail crossing my path for a good ten minutes. My daughter had spotted this particular snail some way off, slowly ambling along.

However, there was no question of us walking around it. “We have to wait for the snail to pass,” I was told, quite firmly. You know those times when you can sense a meltdown fast approaching if you disagree? It was one of those. So, we stood there patiently waiting for the snail to make his way across our drive.

To begin with, I was a bit annoyed, thinking of all the things that needed doing, but then it (slowly) dawned on me that it was actually quite relaxing to do nothing other than just watch this snail. To take in all the colours and patterns on his shell; to watch it rock side to side gently as it moved. My daughter was completely focussed and it made me realise that as adults, the times we spend completely engrossed in nature are often few and far between.

I tend to think of myself as in touch with nature as I spend so much time outside in the garden or allotment but if I’m entirely honest, a lot of that time I’m not really taking it all in; I’m thinking about the next job that needs to be done.

Therefore, in honour of my completely made up ‘Slow Gardening Movement (well, we can have it for food and all sorts else, so why not?) this month’s blog is not going to give you something to do or make in the garden with your children. I challenge you instead to do as little as possible.

Just breathe in a little bit of nature together, wherever you are. Kick off your shoes and socks, sit on the grass and feel very blade between your toes; lie on your backs and watch the clouds go by. Go on, try it. You might like it. And besides, all the jobs that need doing will still be there tomorrow…..